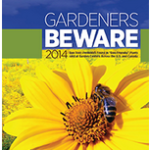 Are bee-killers lurking in your backyard? According to a national study released today, there’s a good chance they are.

The study, Gardeners Beware 2014, released by Friends of the Earth and other organizations, including the Maryland Pesticide Network, shows that 36 out of 71 (51 percent) of garden plant samples purchased at top garden retailers in 18 cities in the United States and Canada – including plants in Cockeysville, Maryland, contain neonicotinoid (neonic) pesticides – a key contributor to recent bee declines. The neonic levels in some of the flowers were high enough to kill bees outright, assuming comparable concentrations are present in the flowers’ pollen and nectar. In addition, 40 percent of the positive samples contained two or more neonics.

Maryland beekeepers and public and environmental health advocates say the study confirms the need to restrict pesticides that can harm bees as well as the need for scientifically based professional pesticide usage reporting in the state.

So, instead of helping bees in our gardens, we may be unknowingly poisoning them.

Bees and other pollinators, essential for the two-thirds of the food crops humans eat every day, are in decline in countries around the world. The European Union banned the three most widely used neonicotinoids, based on strong science indicating that neonics can kill bees outright and make them more vulnerable to pests, pathogens and other stressors.

Bees have enough troubles—last year, Maryland lost nearly half of its beehives. Our gardens shouldn’t be part of the problem. Declare your independence from garden centers that sell bee-killing pesticides and only shop at merchants that sell truly bee-friendly plants and products.

Two Maryland nurseries, Behnke’s Nurseries in Beltsville and Cavano’s Perennials in Kingsville, have stopped using neonics on their plants. Behnke’s has also discontinued sales of all neonicotinoid-containing products.

“One of four ‘bee friendly’ plants purchased from a Cockeysville big box store had significant levels of at least three neonics,” said Ruth Berlin, executive director of the Maryland Pesticide Network. “We call on retailers to follow the lead of Behnke Nurseries and Cavano’s Perennials, who have stopped using neonics. Until then, gardeners should consider organic plants to protect bees.”

Neonicotinoid insecticides have been responsible for several high profile bee kills from high doses of the pesticides, but a strong and growing body of science shows that neonics contribute to impairment in reproduction, learning and memory, hive communications and immune response at doses far below those that cause bee kills. In this study, all of the nursery plant samples where neonics were detected have the potential to harm or even kill bees.

More than half a million Americans have signed petitions demanding that Lowe’s and Home Depot stop selling neonics. In the face of mounting evidence and growing consumer demand, nearly a dozen nurseries, landscaping companies and retailers, including BJ’s Wholesale Club with more than 200 locations in 15 states, are taking steps to eliminate bee-harming pesticides from their garden plants and their stores.

Smart on Pesticides Maryland continues to advocate for a scientifically valid pesticide reporting system, which would require professional pesticide applicators, including farmers and lawn care companies, to make their pesticide use information available to public health and environmental researchers. This information will help researchers determine if and when pesticides are affecting public health, waterways and wildlife – including honeybees.

Amd if you haven’t already, sign our petition to establish a pesticide use reporting database in Maryland.