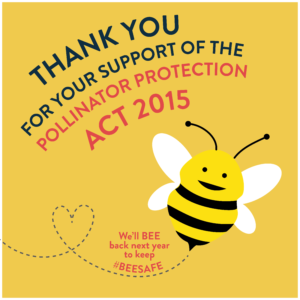 Though we were disappointed that the Pollinator Protection Act (Senate Bill 163/House Bill 605) did not pass this legislative session, we are pleased to report that we’ve built a lot of momentum to restrict neonicotinoid (“neonics”) pesticides in 2016.

Pressure brought by industry and big Ag, out to protect their financial stakes, prevailed in the 2015 Maryland General Assembly. Powerful chemical industry lobbyists successfully created confusion around solid scientific research, and the bill was not voted on. 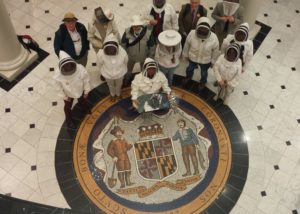 The good news is that the House of Delegates’ Environment and Transportation Committee intends to study scientific research concerning how neonic pesticides affect bees, wildlife, aquatic life and human health over the summer.
Though we weren’t successful this session, we still have much to celebrate. For instance:

In addition, we generated a lot of media attention to this issue! Here are just some of the news stories about our efforts:

Without the vocal support of our advocates, we would not have had such an impact! Many thanks to everyone who wrote or called legislators, or who tweeted or posted on Facebook spreading the word about our effort to pass commonsense restrictions on neonics. Continue to watch this space for updates in the coming months!
Read the entire press release here.