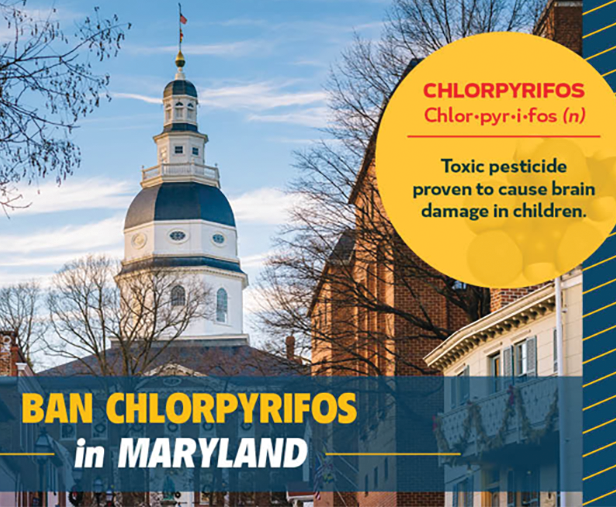 – Today the Maryland General Assembly gave final passage to legislation that will ban chlorpyrifos starting January 1, 2021. Maryland will become the fourth state in the country to ban chlorpyrifos, a toxic, nerve agent pesticide that has been found to damage children’s brain development, contaminate waterways and injure wildlife.

“Even amidst our current public health crisis, the Maryland legislature acted to protect all Marylanders’ health for years to come by banning this toxic pesticide, and we are so grateful,” said Ruth Berlin, Executive Director of the Maryland Pesticide Education Network. “Eliminating chlorpyrifos will protect our vulnerable populations, pollinators and Chesapeake Bay wildlife. The Smart on Pesticides coalition extends our heartfelt thanks to bill sponsors Delegate Dana Stein and Senator Clarence Lam, as well as committee chairs Senator Paul Pinsky and Delegate Kumar Barve for their strong leadership. Delegate Stein, in particular, has been a true hero in our fight to end the use of this harmful pesticide the past three years.”

After years of study, the U.S. Environmental Protection Agency concluded that chlorpyrifos was unsafe and proposed a rule to ban it in 2015. The Trump Administration killed the proposed rule weeks after taking office. Since then, California, Hawaii and New York have instituted chlorpyrifos bans, as has the European Union.

Chlorpyrifos is linked to neurodevelopmental issues, autism and cancer in children, as well as breast cancer in pre-menopausal women. It is also a major concern for the health of aquatic life and the Chesapeake Bay and harms pollinators.

The final version of the bill allows the ban to sunset on June 30, 2024. While not in favor of the sunset, advocates say this should provide time to definitively prove Maryland agriculture does not need chlorpyrifos in any circumstances in order to be productive, and they predict that many other states will pass their own bans before that sunset. The final bill also allows possible waivers for farmers who grow green beans for canners and orchardists who apply the pesticide in the winter to tree trunks, if no alternatives can be found, until December 31, 2021.

The coalition previously denounced the Maryland Department of Agriculture’s alternative proposal to “phase out the regular use of chlorpyrifos” as unacceptable, because the regulatory process lacked certainty  and because the department does not have the financial resources and expertise required to develop and defend a regulation banning the pesticide.