In December 2010, representatives of the Maryland Pesticide Education Network’s Pesticides and the 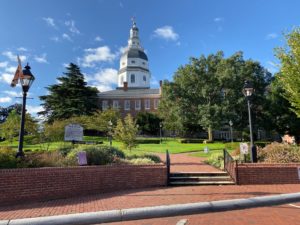 Two outcomes of the 2010 Bay Cabinet meeting were requests for:

MPEN worked with DNR on a survey disseminated to state groundskeepers in 2011, with responses compiled by DNR and assessed by MPEN, to identify where best management practices were being implemented and where pesticides of concern were being unnecessarily applied. MPEN agreed to work with Md. Dept. of General Services (DGS) and DNR on transitioning the State House grounds to organic land care, as a first step in evaluating the viability of transitioning state land to organic care to protect the Bay.

In 2011, a 31-page report written by the Project’s lead land care consultant Chip Osborne, President of Osborne Organics,  based on soil testing and analysis, was provided to DNR and DGS. The report assessed the then- current condition of the State House grounds and the steps needed to transition the land to a healthy, attractive, weed-free organic landscape. Organic care is based on feeding the soil; healthy soil begets healthy grass without the need for chemicals. 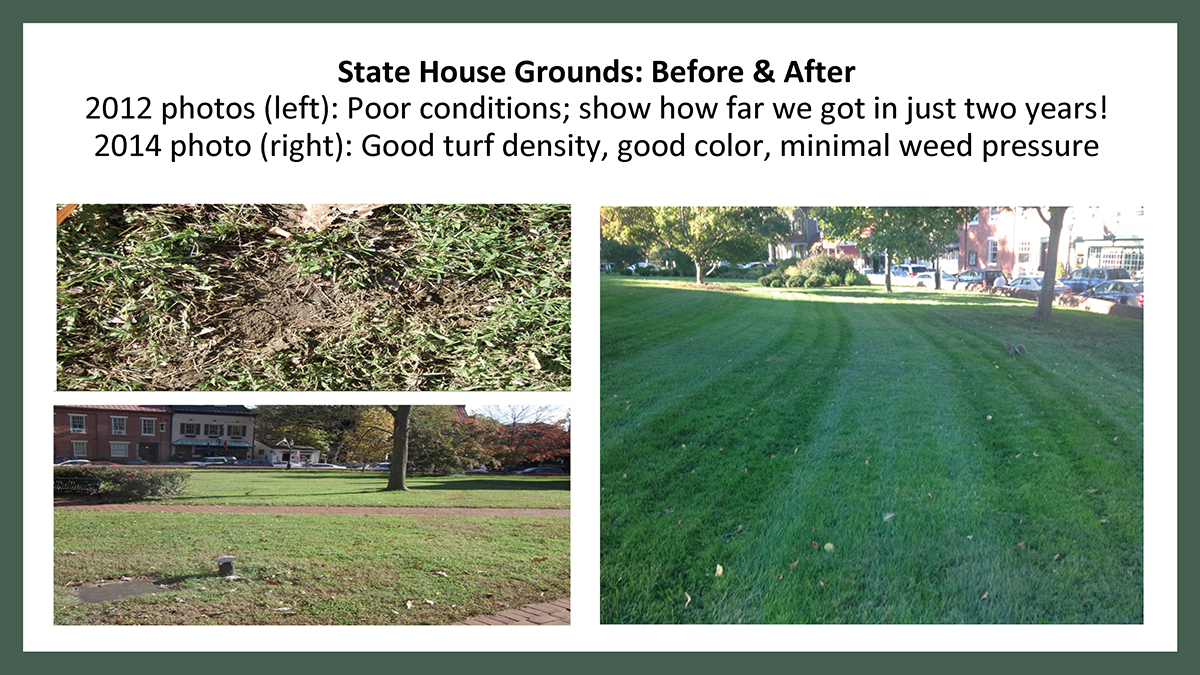 In 2014, DNR sent out a press release to the media about this pilot project in which then-Governor Martin O’Malley stated that, “Thanks to the generosity of dozens of businesses, foundations, and advocates, the Maryland State House has set an example by voluntarily transitioning to pesticide-free grounds. I hope others will follow our lead and help protect our local waters, public health, and wildlife, as well our beleaguered honey bee population, by reducing or eliminating chemicals on our lawns, parks, and gardens.”

Over the next few years, the pilot project encountered several challenges, including a period of time when the project was halted by the State for over one year.  While these setbacks resulted in having to start over with the transition to organic land care, as of Spring 2021, with DGS’s and the State House Trust’s crucial support over the past few years, we have clearly achieved the Bay Cabinet’s goal. KW Landscaping, the company that the Project relied on to manage the grounds, did so as a pro bono offer to the project. Based on the quality of their project management, KW Landscaping was hired by DGS in 2019 to continue managing the grounds.

“After these historic grounds had been previously treated chemically for years, as the Project team’s land care manager, in partnership with the Project’s lead consultant, Chip Osborne, and with DGS’s and the State House Trust’s exemplary initiation of and strong support for this project, we succeeded in the State House grounds illustrating what is possible with an organic approach – green thick grass with very little weed pressure. If this organic approach can work on the State House grounds, then organic can be adapted to work in our parks, playing fields, and on our lawns,” stated Kevin Wengernuk, President of KW Landscaping.

“The Maryland State House, the oldest working state house in the country, is the very first state house in the country to transition to organic land care. Maryland, under two governors, has led the country in their commitment to lead the nation by example. In addition to protecting the health of people, pollinators, and Maryland’s waterways from unnecessary health-impacting pesticides, a growing body of research also underscores that organic land care optimally sequesters carbon, and thereby plays a critical role in mitigating climate change,” noted Chip Osborne, President of Osborne Organic, the Project team’s lead consultant.

“We are grateful to Governor Hogan’s administration for ensuring and supporting the continuation of this Project launched in 2012 that has answered the Governor’s Bay Cabinet’s 2010 question as to whether organic land care is effective and can thereby reduce pesticide runoff into the Bay. The completion of this nationally unique Project and the state’s continued commitment to maintaining the State House grounds with an organic approach underscores that replicating organic land care throughout the state can serve to protect our babies, bees, and the Bay from unnecessary toxic pesticide exposure,” said MPEN Executive Director, Ruth Berlin